In my haste to rush out of town last week [not pursued, just eager to go ;) ] I didn't mention the Factory reading series Feb 28. 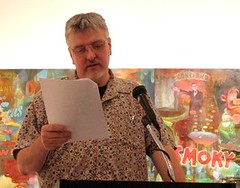 Roland Prevost read some material from MetaFizz and excerpts from his new Dragon series. When I first saw him read, he seemed to be able to command the attention and perform the poem in a relaxed way but he keeps improving further as months pass. 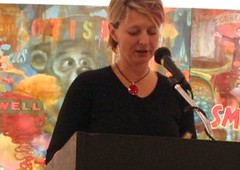 Joanne Proulx read from her first novel, Anthem of a Reluctant Prophet. It is about a skateboarding teenage boy, ill-equipped to handle life as is, who discovers he can foresee deaths of friends. He gets a 6th sense for their moment of death. We follow him thru all the fallout that descends from there of what people expect of him, how they react to him and how to make sense of his world as it shifts.

She's an excellent reader, a storyteller who can hold an audience not just with the words, but how she tells it, although the content, at least part of the excerpt she read is gory. 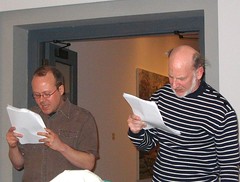 The Max Middle Sound Project (writers John Lavery and Max Middle) performed a variety of sets, including their heritage apple piece (somewhat lost to the bouncy acoustics of the room), a sestina broken out to two voices, Fetterly's garage, and a few light pieces including one by Lavery entitled Ontario that was Elvis spotted at the roadside by a lake with end rhymes pulled out and Max popping out behind with cha-cha-hand waving like old musicals...it's always hard to describe what it is that they do. A novel's narrative is far easier to relate. But some people seemed to be catching the rhyme or chuckling with the sound plays.

A chapbook of my poems, Oath in the Boathouse has been put out by above/ground press. 300 copies. $4 each. There's a sample poem at the link.

And coming up very soon is the Ottawa International Writers Fest, schedule now up.