There was a Factory Reading at a reading at Saw Gallery March 26th.

The winner of the PK Page Founders' Award for 2009 is Shane Rhodes. 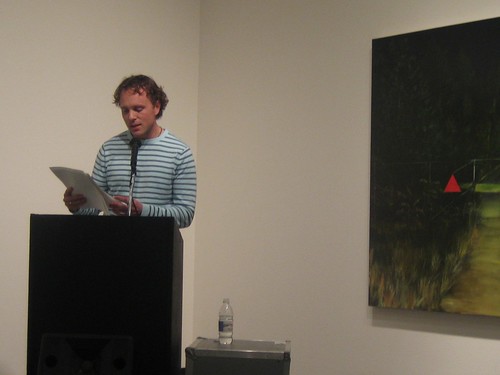 He read from his newest poetry manuscript in progress, "The Air". It's a sometimes Eunoiaesque explorations of subsets of sounds, looking around at etymologies. His skill in using devices of rhyme and meter is clear. One poem was a tribute, a monologue to a man who died of HIV, the narrator rebuking his whine that it wasn't AIDs that messed you up; it was the decade of coke-use. Another poem spoke of a backyard where among the garden, melons, were the wrecks of old cars, warted leather convertibles that would be fixed into former glory one of these days.

His last work published was The Bindery.

(The painting in the background is an oil by Michael Harrington. Each has an interesting quality of light and color.) 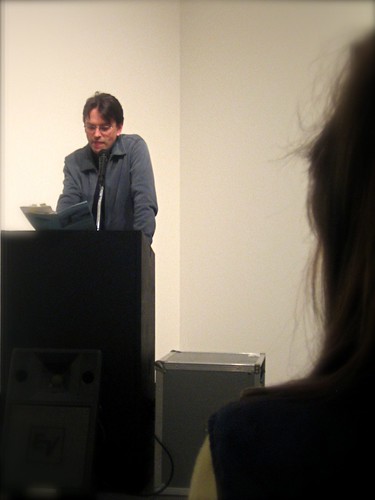 Paul Tyler read from a blue chapbook. (I know, that's as useful as "what kind of car do you have?" "Blue".) They were poems about politics ("desire inventing dogma from the dust" in one about the Taliban blowing up Buddhas because they are unnatural, not created directly by Allah and he said something like as if history left alone grows Buddhas in the desert).

He also wrote of past workplaces, butcher shop and end-stage care of seniors and the people his mind can't erase. And wouldn't want to. Like Robert Louis Stevenson's windows, it's all communication made to be heard. There were some lovely phrasings that were easy to grasp on first pass such as all of the doors of me wanting this.

A good night out of poetry. 20 or 25 people came despite the cold rain and it being end of week.
Collapse